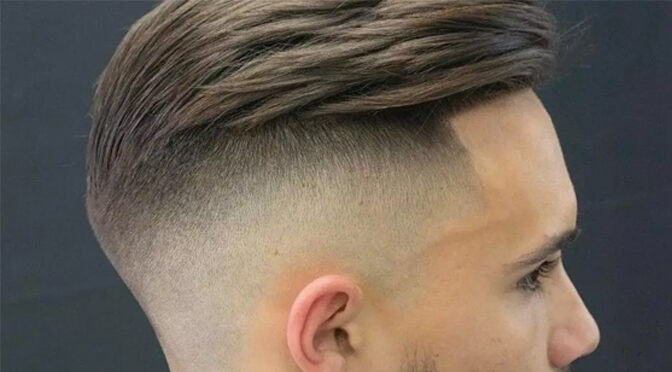 A fade is a shorter taper that blends or fades into the skin—hence the name. … A fade is the style for you. Go for a blended hairstyle if you want to leave some length on the top, sides, and back. Most men’s haircuts involve some sort of taper, and if you want a clean, thick, classic cut, a taper is the way to go.

We’ve seen a lot of definitions of taper vs fade, but the way we see most barbers describe a taper is when it’s a fade around the neckline or sideburns. This should be a small subtle fade that is the lowest and least harsh of all of the fade types. It is often worn to fade out a beard into the hairline or with longer hair on the sides to add something different! 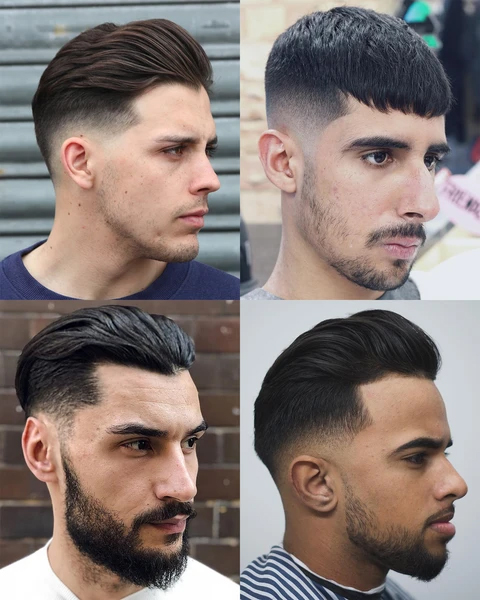 Next up in terms of height on the side of the head is the low fade. Let’s use a skin fade haircut as an example – if you went down to skin, then the skin would be kept very low and the fade into longer length would start around a third of the way up your head. This is great for those gents that don’t want a harsh haircut, but who still want to add some transition to the back & sides.

As with all of these it’s pretty self explanatory. The fade will start around half way up the head and somewhere between a third to two thirds of the side of the head. This will often be just above eyebrow height and can frame the eyes nicely. It’s also around the maximum height you want to go if you have a longer head, as a high fade can make the head appear even longer. 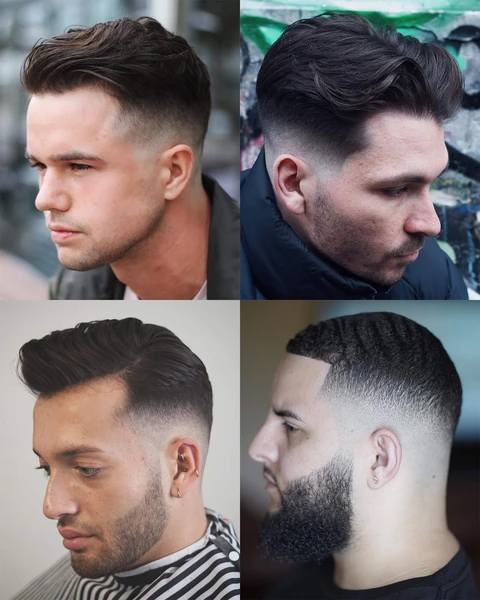 You guessed it, the highest of all of the fades! The high fade will start anywhere in the final third or so of the head and is the harshest of the four fades. When worn high and tight the high fade can almost reach the crown before transitioning into longer lengths, which makes it a lot more harsh. 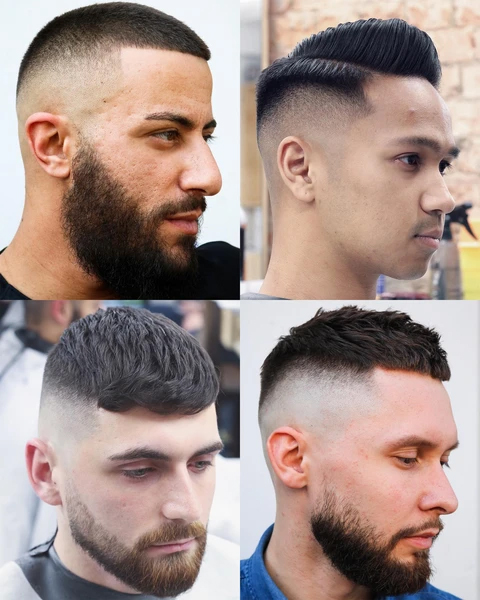 What Is A Skin Fade (Or Bald Fade) Haircut?

When talking about the fade, the skin fade haircut is often mentioned. A skin fade once again does what it says on the tin. It means that the side of the hair is taken down to the skin to bald. This is normally done with a foil shaver (or even sometimes a straight razor) as opposed to a clipper to really get that ultra close shave. A skin fade haircut though can still be split up into the four categories above, so it’s up to you and your barber whether you go for a taper, low, mid or high skin fade.

Not all fades are skin fades though – a fade is just transitioning from one hair length to another so it does not mean that you have to go down to skin to have a fade. A lot of people won’t want to go down to a 0 so you can still ask for any guard length fade. The skin fade is the most defined fade however as it’s very clear to see hair going from bald to say a 0.5 into a 2 at the top of the sides. Whereas when you start at a number 2 and work into a 3 it may not be as clear and obvious, depending on the colour and thickness of your hair. 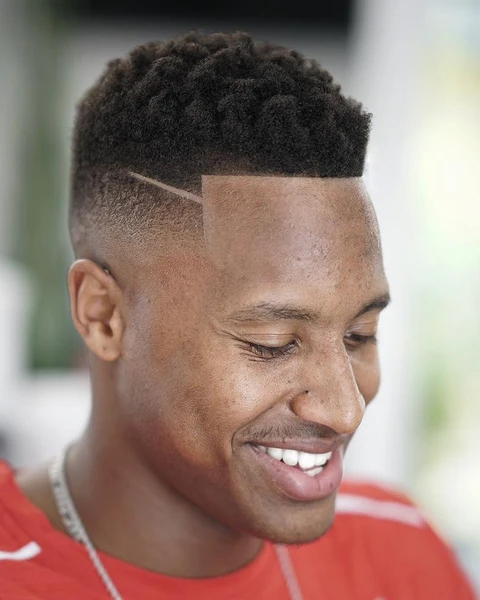 This isn’t the most versatile look, as it’s designed to stay in the shape that it’s been cut, so there’s not much room to change it up. Therefore, you need to make sure you’re committed to the look and it’s one that works for you. It goes without saying that afro or extremely curly hair is essential.

Before your cut, make sure you take the time to discuss with your barber or stylist the degree to which you want the shape of your afro to point out; getting this part right is crucial so that you can brush it into shape easily.

There are so many different variations on this style so it might be worth taking some images of styles you like with you to your haircut. Guys often feel embarrassed taking pictures with them but the more insight the person cutting your hair has, the better.

Make sure you go to a barber who knows how to work with your hair type and get yourself proper tools like an afro comb to style. 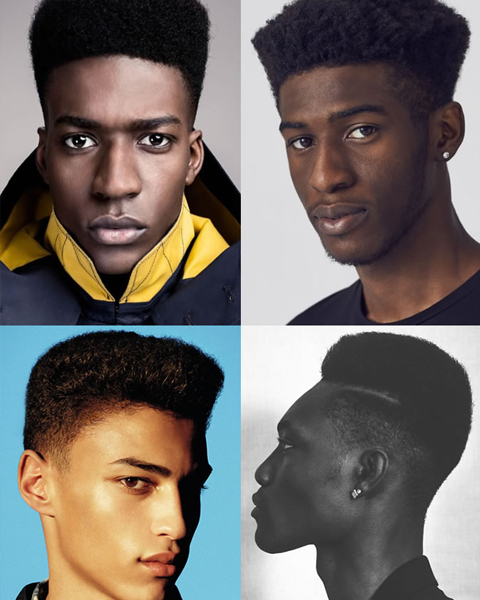 How To Ask For A Fade Haircut?

1) How high do you want to go with the fade? Low, mid, high or taper. Talk to your barber to see what they think for your face shape, the style you’re going for and your lifestyle. Different fade heights will work with different face shapes and different styles too.

2) What do you want to go for on top? The fade just defines the style of the back and sides, it’s not a style on its own. Figure out which style you want on top too (there’s some inspiration down below).

If you’re not sure start with a say a number 2 to be safe and ask your barber to work down if you want it shorter. It’s better to start longer than go too short and not like it. Tell your barber beforehand though that you’re not sure how short you want to go, then they can do a test area on your head so you can see. The last thing you want is to waste your barbers time, they finish the fade and you say “can we go shorter actually”.

4) Take a picture. If this all sounds too much then just find a picture of what you want. By far the easiest way to get what you want and not worry about any of this is to show a picture or even better a few different pictures. This makes sure you and your barber are on the same page, rather than asking for a high skin fade and not really knowing what this is or what it will look like.

Now you know what the different levels of fade are and exactly how to ask for a fade haircut, here’s some inspiration for popular haircuts that work great with a fade. 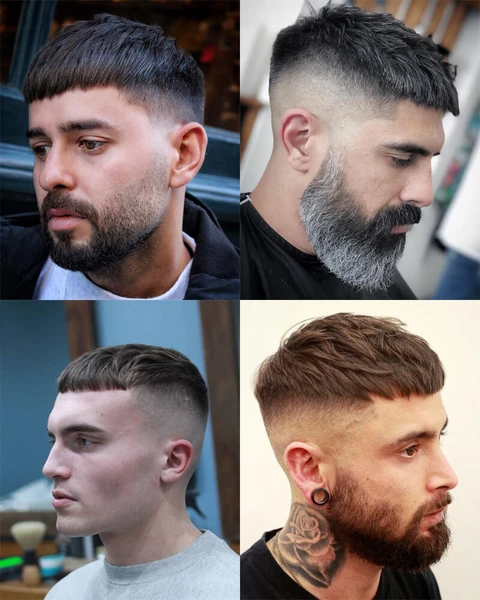 Wear the crop with a longer fringe or a shorter fringe, mainly dependent on your face shape and where your hairline sits. Get your barber to add loads of texture thoughout for the textured look.