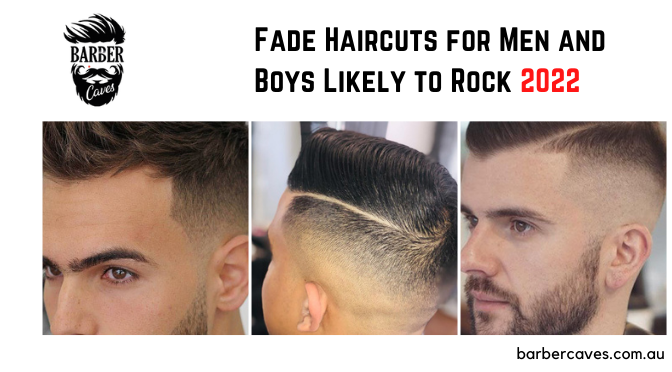 Fade haircuts for men and boys are the new ‘in thing’ and the most amazing part of these haircuts is that there are no age restrictions if you are a fan of this particular haircut. With time the shape and form of these haircuts are undergoing changes and the coming year is likely to see some more varieties underlying the personality of the men and boys in a stupendous way.

On this page, let us discuss a few variants of these unique fade haircuts for Hobart men and boys like the rest of the country.

The High Fade variety is one of the most happening contemporary fade hair varieties, which typically start higher up around the temples rather than around the midway above the earline. The hair at the sides, as well as the back, is trimmed particularly short. At times, they are even trimmed down to the skin (in that case the name turns to skin fade — we will discuss it later on). Since the fade commences higher up, the cut is very rightly famous as High Fade.

This is another variety of fade cuts, which starts lower down those high fades. They usually commence midway above the earline and give your look a classic tinge. The typical clean-cut classic form of fade haircut for men in Hobart is all about keeping the shorter portion of the hair more tilted towards the base, thereby giving a perfectly balanced look and feel.

Unlike the high fades that begin around the temples, or the medium fades, which get on midway above the ears, the low fades are all about the lower fade lines, around the level of the ears. This particular type of fade gives the hair a somewhat longer appearance, as the longer portion covers more area of the head than the shorter, faded portion.

This typical drop fades may start lower, higher and midway through the earline. Yet, all of these forms of haircuts have one factor in common. All these varieties have the fade line at the very rear of the head, which is brought down lower than on the two sides. This results in a sudden dip of the fade line, thus giving the cut its name — drop fade.

Skin fades are also at times termed as bald or zero fades, as they are trimmed to the skin, giving almost the look and feel of skinhead cut or bald head. These fades can be of any type, with one common feature — the hair is always trimmed to the shortest portion of the fade, giving the impression of that baldness.

This particular cut gives a high-contrast look and feel, which gives the individual a sharp look and feel and that helps in gaining attention.

This is probably the toughest form of fades from the barber’s point of view. This particular fade starts from the temples, hence giving this name. The hair around the temple is precisely cut and trimmed with clippers to provide a lineup and shape up design. The fade, however, continues beyond the temples. Because this is one of those fade haircuts for boys in Hobart and hence, you will find young boys opting for this particular fade cut.

Therefore, there are so many types of fade cuts to choose from and only a quality barber shop will be well conversant with all of them. If you are in Hobart, Barber Caves is the best name to turn to. Call us today to book an appointment.